This is so far my largest sitting Eevee plush. It is a backpack, but you literally can't put anything except coins in it. And the straps are too short. It's tail will get stuck between your body and it's body if you put it on. Well, a nice plush for display. The fabric feels rough, not minky. But the neck tuff and tail feels good.

It is HUGE! I ordered it from Amazon JP and had to pay very expensive shipping fee to get it shipped to the US. It's made of short pile smooth minky fabric, and the keyboard cushion is made of flannel. Is it really a good idea to hold such a big thing while you sit in front of a desk?
You can see some cute prints on the keyboard but THERE'S NO UMBREON?????? I understand that "Booster" and "Blakie" both start with B but it's kinda unfair LOL

I didn't know it existed until I saw one for sale in the community, I had to have it!
I thought it was the 2012 Tomy talking plush at first glance, but it's actually bigger, and they're slightly different. The Tomy one is better made, but the Sonokong one has better stuffing in the ears. They're like thin foam pieces that support the ears. 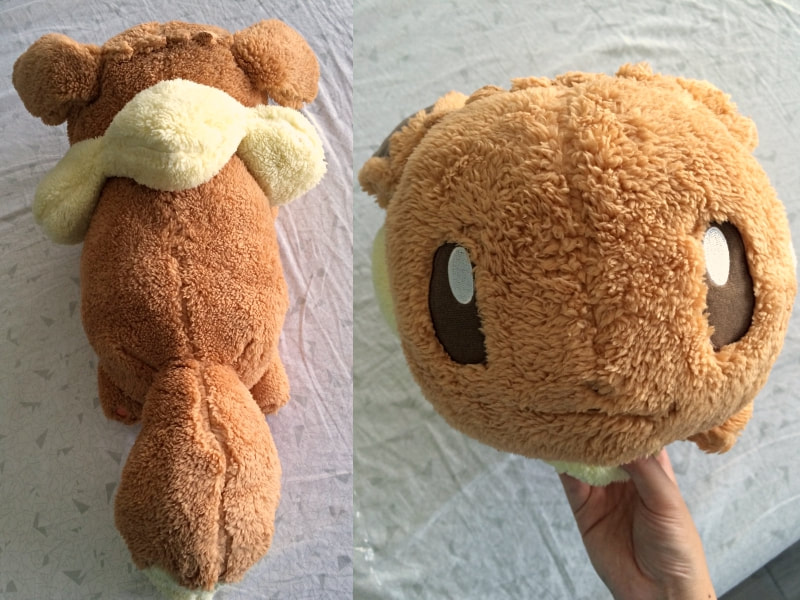 Yet another large fuzzy laying Eevee plush. The pattern is almost the same as the 2014 Kuji plush, it's just bigger, and has a darker color fabric for the inner ears. I wasn't tempt to buy it when it first came out. Just too many similar Kuji plushes!!! Got a TTO for a cheap price this year. 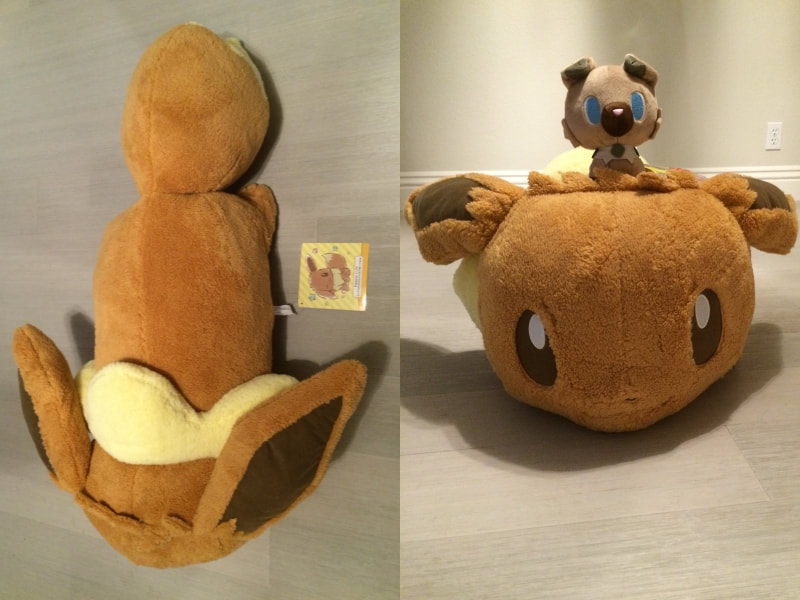 When I saw the concept image of this plush on Tomy 2017 catalog I was totally in love with it. But this plush didn't appear on market until early 2018. So I ordered it as fast as I could, but upon receiving it I was very disappointed. The face looks awkward, the head is misshaped, and it has a very weird design of the bottom part. You can't see it when displaying the plush, but it's paw pads of the back legs are embroided on a separate piece of fabric instead of on the paws themselves. It's still a nice plush, with its ears able to tilt and 12 different talking sounds (including English and French), this plush is a nice toy for most people, but I still can't bear the poorly designed bottom part. The retail price is $30. Tomy should have done a better job. 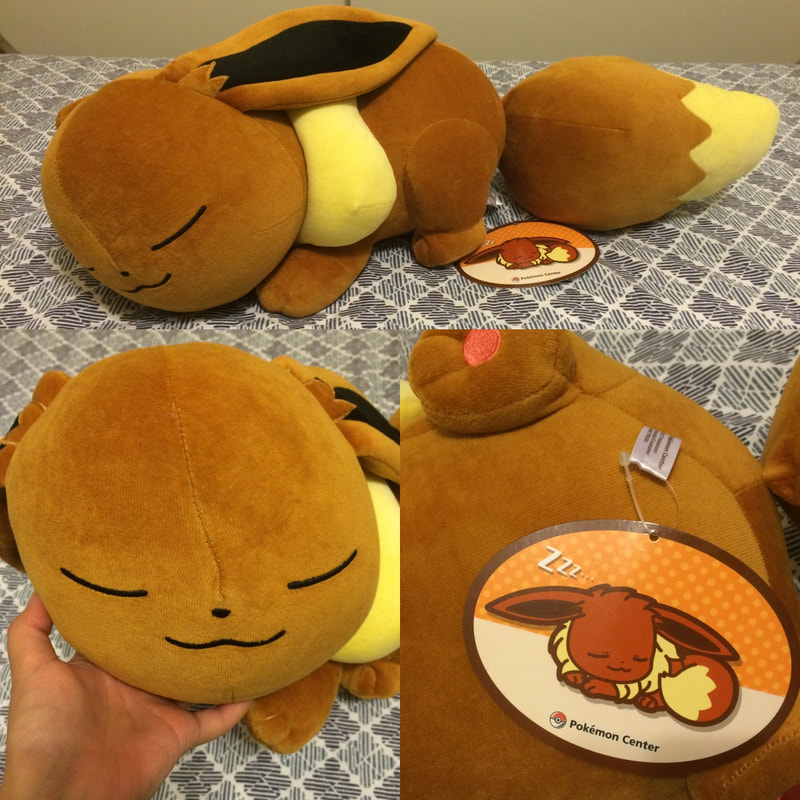 This plush is made of a velvet-like short pile fabric, and is supposed to be squishy. I'm adding "supposed to" because it's not as squishy as other "mochi" plushes previously released. There's also a USA version, but I don't own it. International shipping for this plush was very expensive, I spent that money and then the USA Pokemon Center had those Eeveelution sleeping plushes in stock, why this is always happening?! 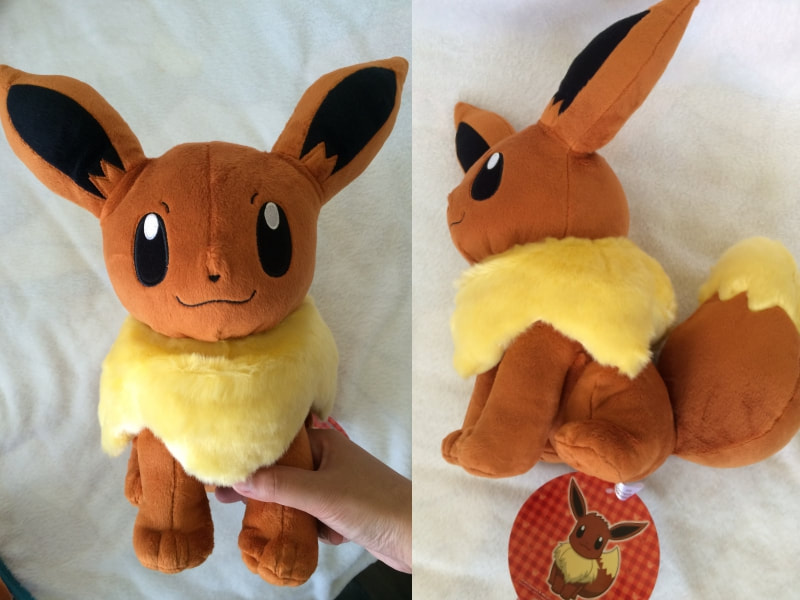 Pokemon Center released all 9 Eeveelution life-size plushes via pre-order in 2017, Eevee is the cheapest one, all others were 20000yen+ and about 1m tall! Eevee has soft fur, but I don't like how the ears are placed. 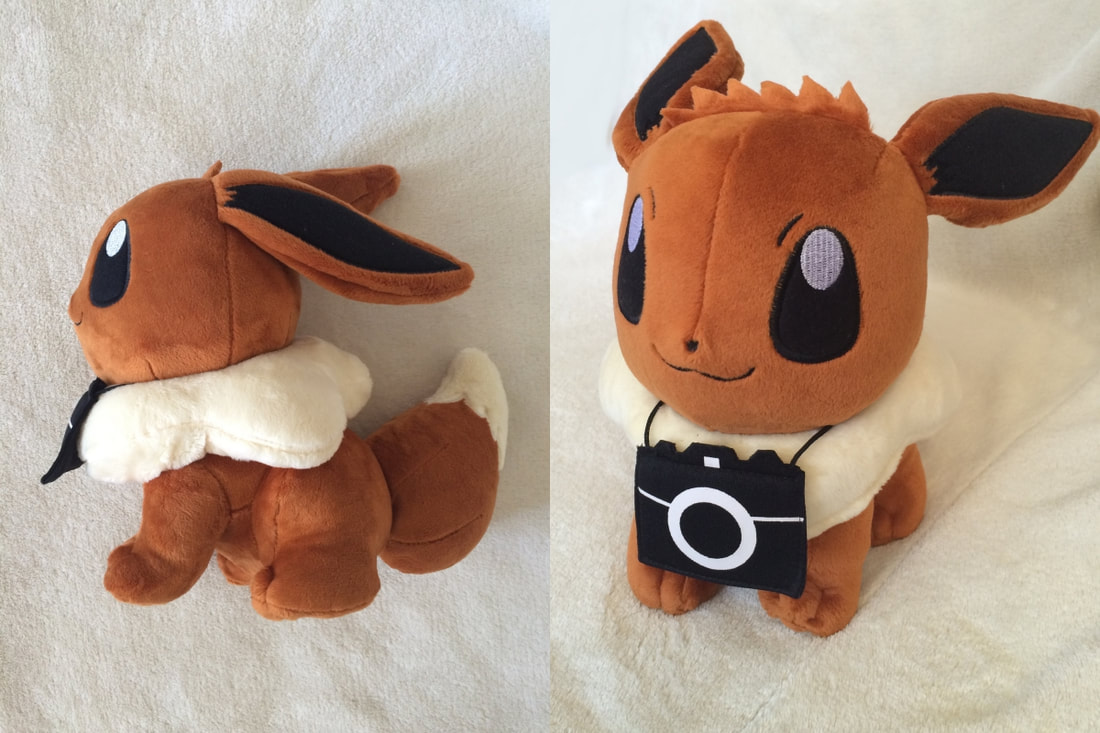 According to the information I searched on Google, this plush was given out in July 2017 in a Taiwan Canon promotional event. I'm not sure how many were given out, I found mine on a Taiwan shopping site. I've never seen a second one for sale. 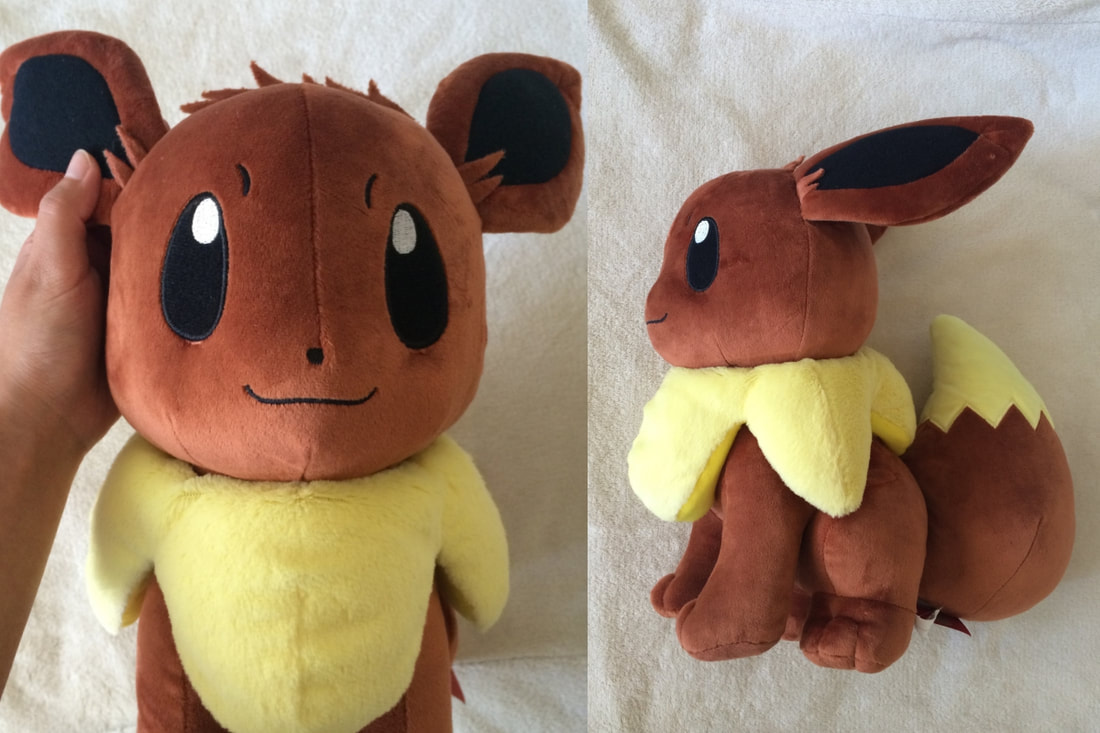 I don't know if this really is a licensed product, cuz there're too many bootleg crane machine plushes in China. This one has a hang tag and a laser sticker on it, which makes it more possible to be a legit plush. The plush is well made. There're also mascot size and 50cm giant version of this plush. 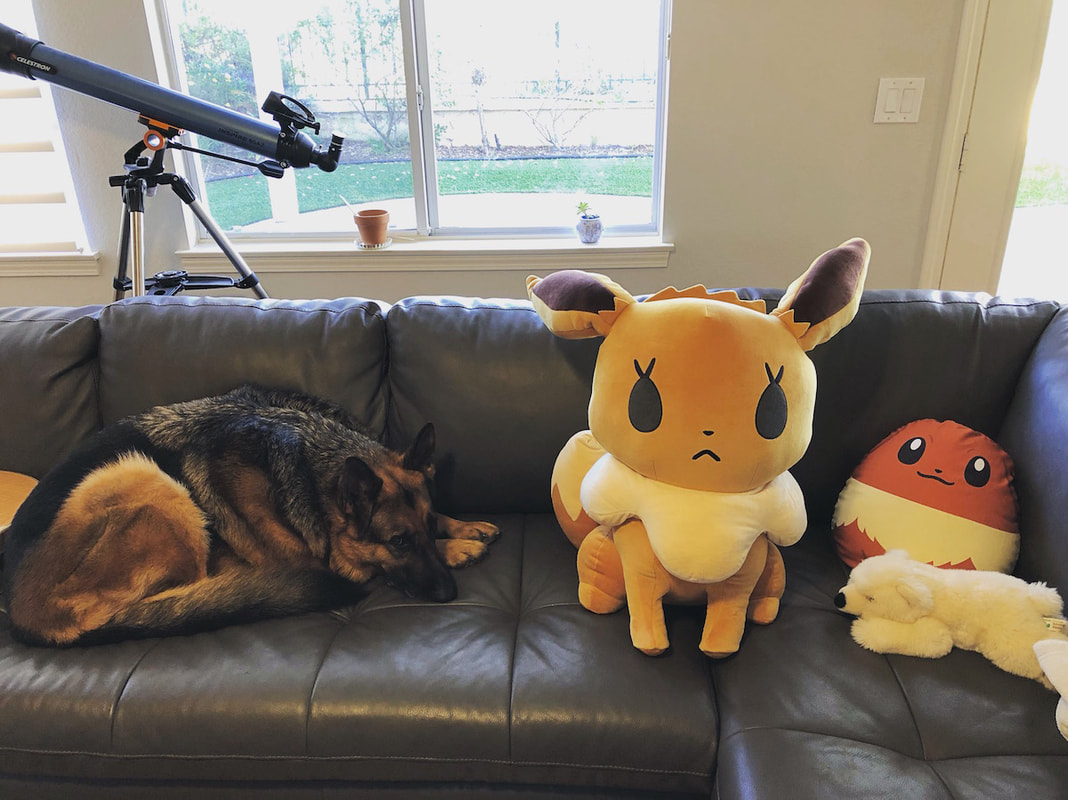 This plush was sold through online pre-order in 2018 and was released in early 2019, the price was 23000 yen (plus tax) and shipping it to the US cost me $60+. The thing is huge! It has stiff foam-like stuffing in its front legs and ears, holding them straight, and the rest of it is extremely squishy, just like the regular sized It's Demo Eevee plush. I do like it a lot but I don't have space to display it, the poor thing is now sitting on top of a closet.

I've been after this plush for years!!! I didn't realize the rare Heartland Eevee plush is called "cotton" plush and I thought I was looking for two different plushes, until I bought the "cotton" plush and compared it to pictures of the Heartland plush from other collector's pictures. Such a surprise. I even bought bootleg of this plush before obtaining the real one. There're pictures of the bootleg if you continue reading. I've also included reference pictures of several Eevee plushes of similar size. 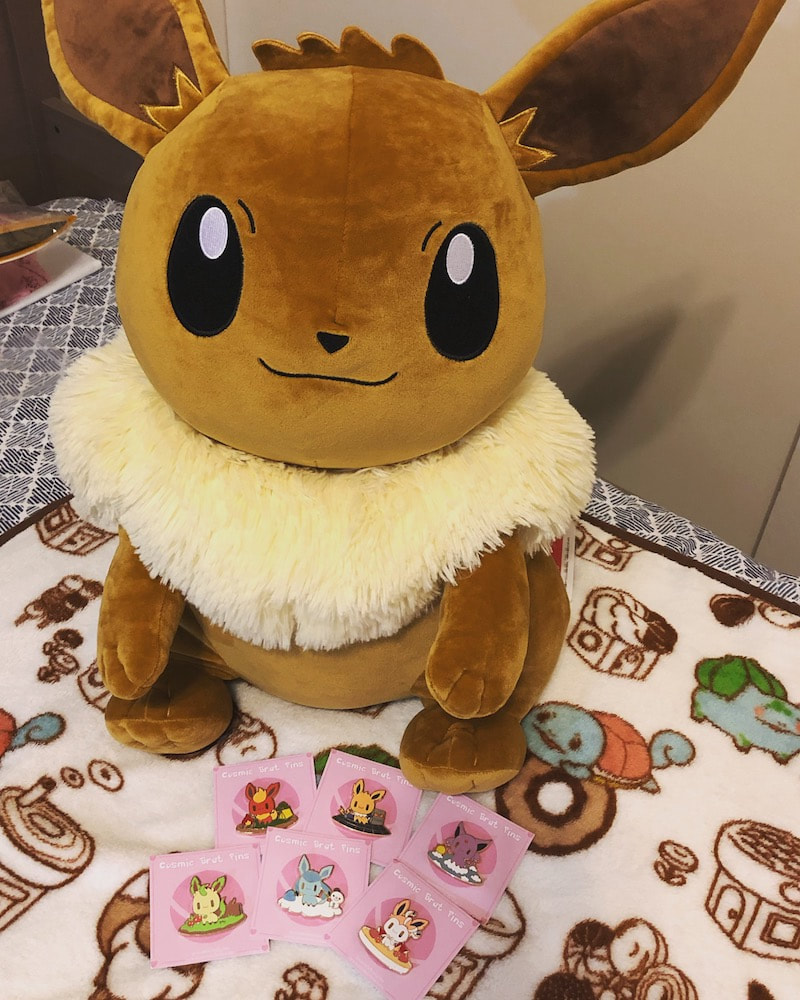 I don't know what's the exact translation of the name of this plush (むぎゅむぎゅっとつつまれぬいぐるみ), it was a pre-order on Tomy website in 2018 and later on second batch pre-order was available. So it's not very hard to obtain. The price of Eevee & Pikachu as a set was cheaper than purchasing two separately, so there were lots of resale of this plush on Japanese shopping sites, I guess people bought the set and sold one of them. Talking about the plush itself, it's made of short pile stretchy fabric, stuffing is soft, the tail is stuffed with micro beads. The part I dislike about it is the fabric they used on the neck, it's the long pile string-like fabric which makes me allergic. 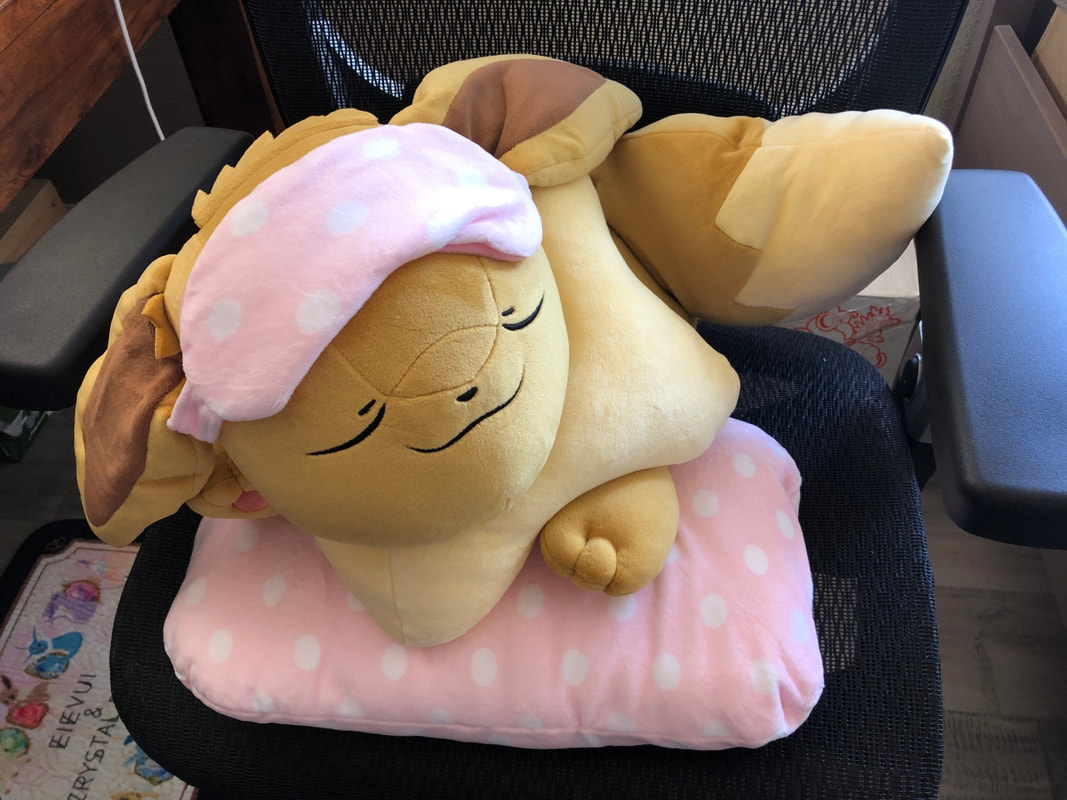 Got this from a middleman and it saved me a lot on shipping because they brought this plush to China and I carried it to the US personally. It's as big as the PC 2017 mochi plush, with a lighter color and slightly different posture. The eye mask and pillow came with the plush, and there was a super big plastic bag with Eevee printing that came with the plush.